The public server for the Exile Game is called Land of Catastrophe (LOC). You'll find it in the Join Game tab in Minetest. Search for it in the list of public servers. The connection details are as follows: 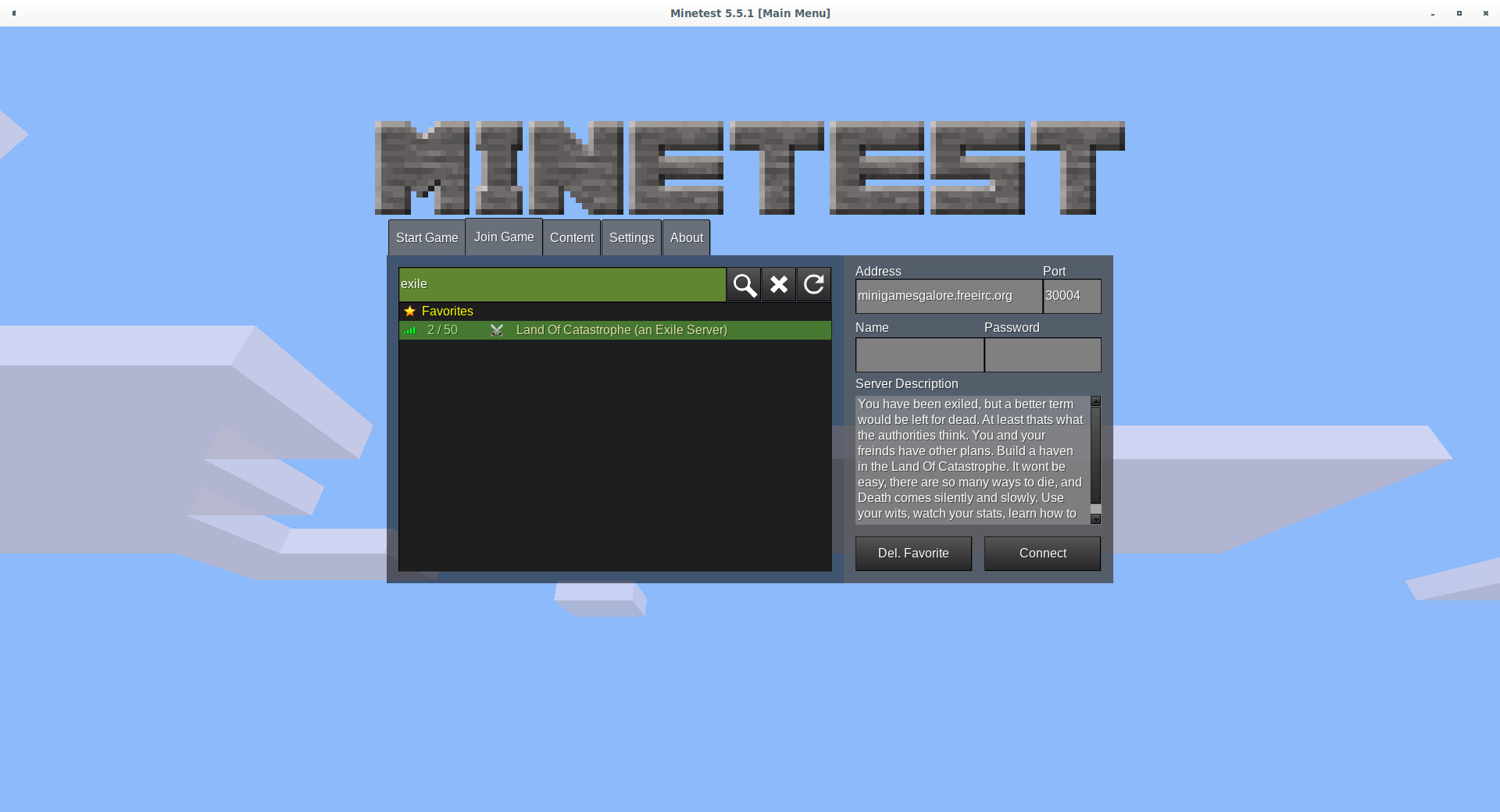 There is a forum page for Land of Catastrophe at forum.minetest.net.

The game chat on the Land of Catastrophe server is bridged to IRC chat in channel #exile on the ircnow network.

The point of the game is for everyone to have fun trying to survive the elements and mobs on this planet. It isn't well suited for battles between players. You benefit more from helping other players then from taking from them or causing them harm. As a general rule, we encourage players to be polite and cooperative with each other. There is nothing stopping players from attacking each other, but it is discouraged and could lead to a ban on the server if you are causing problems for other players. The admins generally don't like to intervene in game play and have no desire to settle disputes between players as a rule.

Keep in mind that this game is played by people of all ages and from all over the world. Try to keep conversations in chat family friendly and don't build anything inappropriate for younger players. Be polite and helpful to other players if you can. Expect that some players may not speak your language making communications difficult. Younger players may lash out in frustration at this.

Assume bad behaviour is a sign of age or misunderstanding of game play. Most new players are expecting something resembling typical Minetest games. They may view chests as locations for treasure hunting, not realising that they've found stuff belonging to another player. They're intent isn't to harm other players usually, but to progress in their own play. There's also the case of genuine need for survival. Someone who breaks into your camp and eats your food, drinks your water, burns your fires and sleeps in your bed, probably needed it all to survive in the moment. Keep this in mind when trying to settle disputes.

There isn't anything in the game you cant find or make again. If you're struggling or suffering as a result of something being taken ask for help. You'll likely find someone willing to help you replace what is missing. You're also likely to find what is missing in bodies around your camp. Most players that take stuff don't know the game well enough to survive and generally don't get very far with your stuff.

As a player, try to leave a place better then you found it. If you dig up a garden, replant it after for the next person or owner. If you dig up the ground for wet clay, try to fill in the holes with dry clay from the area so it doesn't trap other players or make the ground around someones camp hard to travel through. If you use someones camp, try to replenish anything you used in the moment, so if you use their food, or collected materials, try to replace it before you leave.

Respect other players space. If someone has placed a locked door, respect that the player wishes to keep whats behind it protected from others. Don't dig around the door to get into rooms other players intended to keep others out of. Same goes for doors players left open by mistake. If it's an iron door, assume anything you find in the room was intended to be protected and leave it alone.

Seasoned players that have already made it through all the tech will frequently help new players. Several players have built things to help new players survive while learning the game. Crafting stations can be used by any player, so even if you don't have a station of your own, you can gain access to the tech through using the station placed by another player. Many builds such as Izzy's Castle have all the available crafting stations accessible to all players.

There is a map of the area around spawn for the LOC world. It was first posted on the LOC forum page. 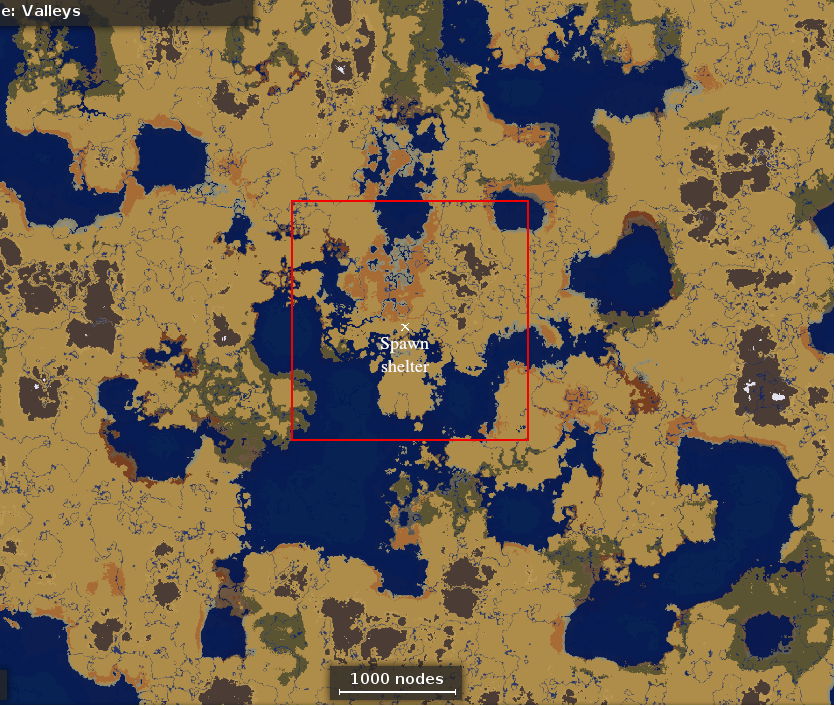 Part of the fun of playing the game is figuring things out on your own. For this reason, spoilers contained in this wiki should be marked as such to give players the option to avoid knowledge intended to be discovered.

Below is an example paragraph marked as a spoiler so you know what to expect. It also provides an example for editors to use to mark text as spoilers.

This feature is made possible by the PmWiki cookbook Toggle

Players spawn in a radios around 0,,1600. You will see lit pillars scattered around directing players to the spawn Shelter located at 0,,1600. There are info text notes written in various places here explaining some aspects of the game. Players are welcome to use it as a starting point to learn basic game play.

Izzyb created a castle at 7,,1300. It's one of the largest builds on the server. Players are welcome to visit and even to stay in a room at the castle as a starting point as they learn to play the game.

DanS has setup many pods to help new players survive in harsh weather conditions. You'll find them scattered around usually with glow paint marking them. If you're lucky the pod will be freshly stocked with basic supplies to help you stay alive.